Members of five different Four Wheel Drive Clubs arrived at Jerusalem Creek campground ready to tackle opening tracks which had been closed over winter.  It was great that two of our newest club members, Doug and Deon, were able to take part as well as Roger and ourselves.  On Saturday morning Rangers Neil and Bill arrived with maps of the areas they wanted each team to drive.  We split into four groups of two or three vehicles.   One group was allocated Steep Track, another Lakes and Pinnacles Tracks, and another group our nemesis from last year, Tweed Spur Track. We were sent to drive Wombat, Webb and Rhonda Tracks near the Big River Arm of the lake.

We set out for Wombat track which runs along a spur at around 800 metres altitude.  The track was in pretty good condition and didn’t need much clearing.  We drove through strong winds and small hail.  As we progressed we began to get good views of the lake.  Then it was time to go down to the lake.  Our maps showed Webb Track heading off north west but we couldn’t locate it.  There was an unnamed track heading north so we took that instead.  It had many steep descents but we finally arrived near the lake.  Any similarity between our maps and what was actually on the ground was purely coincidental. 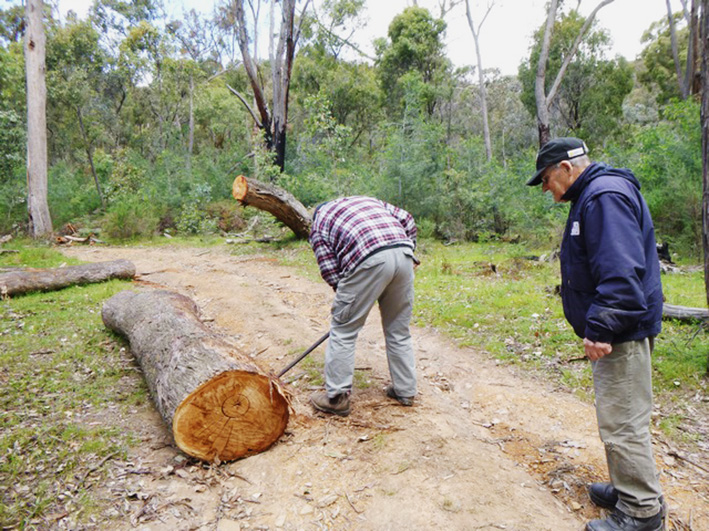 On a previous working bee in the area, communications had been a problem.  We were in contact by radio with the group on Lakes track and we managed to report into the Ranger via mobile phone.  He advised us that as it was so windy we shouldn’t stop under any trees, a little difficult in a forest, but we did find a cleared area beside the lake so we sheltered behind the vehicles and had lunch there.  Our next attempt at navigation failed when the track we were on disappeared into the lake.  Fortunately we found another track which turned out to be the elusive Rhonda Track.  It was a long and tricky climb but we made it back to Wombat Track, then back to camp, clearing a small tree which had fallen since we drove along that part of the road in the morning. 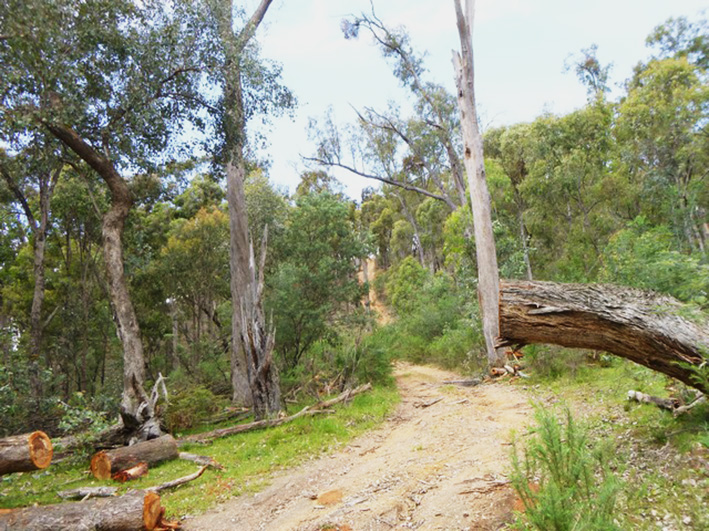 We're going up there?

The Lakes Track team was able to clear Pinnacle Track as well. The group on Steep Track finished their task and went to assist those on Tweed Spur Track where many large trees had fallen.  Soon they had to abandon their efforts as it was getting dark and some of the team had to head for home.  It was rather cool and damp around the campfire that evening. 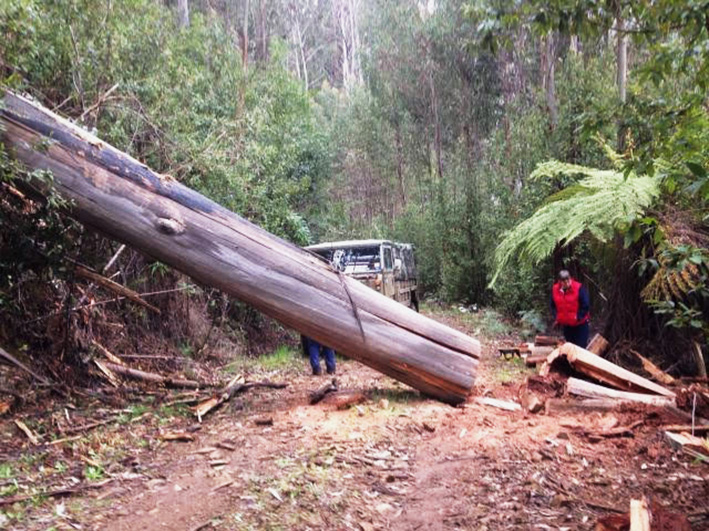 Sunday morning we contacted the Rangers and it was agreed that the whole group would try to complete clearing Tweed Spur Track.  We (Colin, Heather and Roger) were sent to the Blue Range Road end of the track to unlock the gate and work our way along to meet up with the others.  There was a lot of debris on Blue Range Road after the winds of the previous day.

Our first obstacle was unlocking the gate on Tweed Spur Track.  The lock was protected by a length of metal pipe and was extremely awkward to reach and unlock.  All three of us had a hand in it.  We made very slow progress along Tweed Spur as many small wattle trees fallen on the track.  We were trying to contact the rest of the group and the Rangers but without success.  After clearing about 1.5 kms of the track we were delighted to meet the Rangers coming the other way with the others following close behind.  We celebrated with a group photo then we headed off for home by different routes.  Everyone was pleased that we had been able to open all the tracks requested and many were asking “Can we come back next time?”  The answer was definitely “Yes”.