Bill (and his work experience underling, Micky) from Parks Vic

Adam, Ron and Keith from other clubs

As part of our ongoing commitment to FWDV’s Murrindindi Project, members of our Club joined the others at Jerusalem Creek Campground #4 in the Lake Eildon National Park for an early afternoon briefing and on-site assessment of the tasks that were planned for this working bee. All tasks related to the construction of new fences to prevent vehicular access to bushland that has been damaged by inconsiderate four wheel drivers and trail bike riders, or the repair of existing fencing that had suffered damage.

Tuesday dawned after a freezing night, but the sun was shining and we soon warmed up - surprising how quickly the blood starts pumping once you stop leaning on the shovel and start using it for its intended purpose. 600mm post-holes were dug with shovel and crowbar, treated pine posts and stays planted and set with concrete, star pickets hammered in, wires threaded and tensioned. Then all stood back with hands on hips and admired our handiwork. The first 80 metres of fencing done. Going well! So well, in fact, that we had time to tackle the second section of new fencing originally planned for the morrow.

In this case, the posts had already been planted. What was need from us was the installation of a couple of stays, the placement of star pickets and the threading and tensioning of the wiring. Job done! Ron and Wayne had other commitments and departed, leaving a depleted crew for tomorrow’s tasks.

The evening around the campfire was pleasant though the chill did come down again during the wee small hours. Once the mist cleared in the morning, the sun broke through for a lovely Wednesday. Today we would be repairing a couple of sections of damaged fencing, and moving a “Revegetation Area” sign from where it was obscured by the undergrowth to a more prominent position in the hopes it might discourage future vandals from cutting the fence in order to access the area and use it as an illegal campsite. 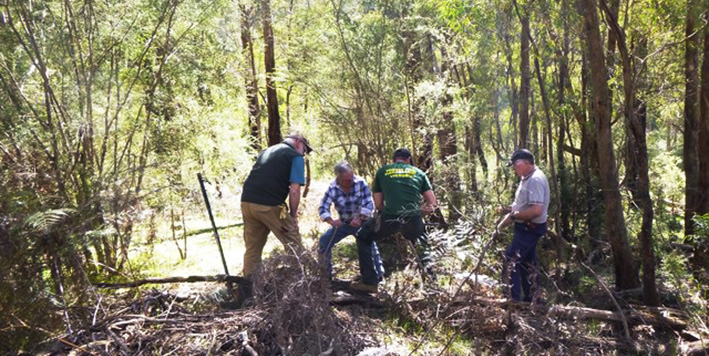 All hands to the wire

Such was the efficiency of our little team of workers that by the end of the day, all programmed tasks had been completed, much to the delight of our Parks Vic mentor. The Offpeak volunteers decided to remain in camp overnight for a leisurely pack-up and return to civilisation on Thursday morning.

Speaking for myself, I think we all thoroughly enjoyed ourselves, and some of us even learnt some new skills.